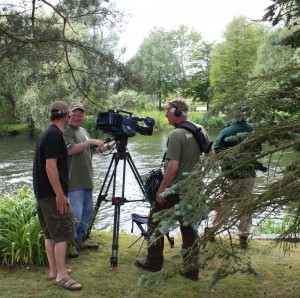 Exec produced by Lester Holcombe,  fans of Mr. Crabtree saw series one of our new TV series on Quest when the first run aired from January 24th 2013. A repeat run is starting very soon and watch this space for news of series two.

The original Mr. Crabtree goes Fishing is the comic strip story of a father who takes his son Peter on a series of angling adventures over the course of a year, fishing for a variety of species along the rivers and lakes of Britain.  It became the most iconic angling book ever  – selling something like 4 million copies!

Author and presenter John Bailey is a lifelong angler,  an original ‘Crabtree Kid’, and one of today’s most internationally renowned fishermen and guides.  With a publishing and presenting career spanning 4 decades, John is the perfect prestenter for Fishing in the footsteps of Mr. Crabtree.

‘Fishing in the footsteps of Mr Crabtree’ will see John fishing for a different species in each episode, using many different methods and techniques. Along with ‘Peter’, John will be fishing in typical ‘Crabtree’ swims.

John and ‘Peter’ will be targeting coarse fish in this series with dedicated shows for Carp, Pike, Tench, Barbel and Perch, as well as River and Lake specials bagging up on a variety of species.

The series concentrates on all of the best elements; the magic of fishing, the misty dawns, glorious sunsets, swirling fish, bubbling swims, bending rods, powerful runs, a collective joy of catching your target fish, of being outdoors and also teaching and helping young anglers. We doff our proverbial caps to Mr. Crabtree whilst at the same time looking at modern angling and the new generation of anglers. Many of the Crabtree tricks and techniques were cutting edge at the time and, in marrying up old and new, we’ll also be demonstrating the evolution of angling and what has, and has not changed.

Further TV series and specials will continue to bring quality angling TV programmes, providing great entertainment, offering education and advice to seasoned and new anglers alike and delivering all the positives of fishing to a wider TV audience.

We will have series targeting specific species, fishing in different regions and locations, and using every possible different technique and strategy. For example Mr. Crabtree on Carp and Mr. Crabtree fishes for Pike. There will be game and sea shows, and there are even foreign adventure programes being planned. Bernard Venables, the author of Mr. Crabtree, was a real angling pioneer and globetrotter and we are keen to take Crabtree on a global quest, catching fish all over the World.