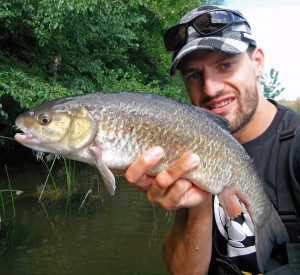 The one thing I don’t like this time of the year, the same as everyone else, is the rain. Not for the same reasons as most people though – I don’t like it because it causes the rivers to colour up and I can no longer have a watchful eye on the fish in my river.

Myself and John both harp on about the importance of watching the rivers in our blogs and there’s a very good reason for it. Quiet simply, the amount of knowledge that can be gained from simply watching is priceless. This is obvious in other sports, such as football, snooker etc, and exactly the same applies to fishing, in all its forms.

I have a small swim on my local river where I’m watching a small group of Chub. The swim has fast water and a large slack eddy for the Chub to meander around in, awaiting anything that might flow or fall their way.

Like all Chub they are easily spooked and at the first sign of man on the bank they retreat to the safety of the deep water and undercut bank.

My plan over the coming weeks running up to the opening of the season is to build up their confidence.

At first I have had to crawl up to the waters edge and flick pieces of bread in, making sure that I am not seen. Now, after a few weeks, I am trying to get them used to my presence and make the association of free bread with the man on the bank.

There is one Chub in the group which seems far more confident than the others and is happy to take bread off the top, on the drop and off the bottom. The other fish, however, need a lot more work.

The confident fish also seems to have an injury to the top of his head, not sure what has caused it, but it doesn’t seem to have slowed him down in any way. With his confidence I feel like he will be the first fish of my 2014/2015 season.

In the short video you will see this fish, and indeed how confident he is. I need to name him, I have  spent more time and fed him more than my own pets over the last few weeks!