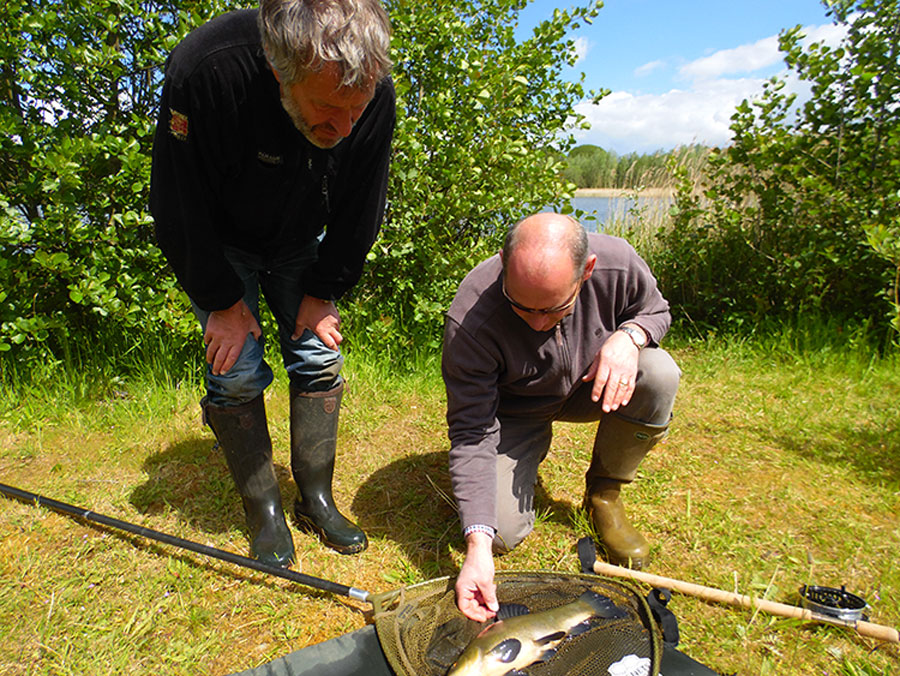 Tench fishing in Spring on the centrepin is always great fun, but this time I was fishing with John Bailey, a great friend and fisherman.

John has been pre-baiting for a while at one of the lakes I had fished with him whilst filming for Mr Crabtree Goes Fishing Series 2. There are seven gravel pits and in one of them are the most amazingly perfect dwarf Tench which grow to no bigger than a pound. We stayed the night at Carricks Castle Farm B&B (the best one there ever is in the whole world) where we had a wonderful evening meal and a great breakfast.

We met John at 8am at the B&B ready to start our Tench morning and hoping to catch some whoppers. The first swim on this seven lake complex was deep with the wind right in our faces which made fishing the float really difficult. I had my favourite float, a porcupine quill, it was set six inches over depth with an AA shot on the deck to stop the float moving in the wind but also so we could see any lift bites that Tench are famous for. The first fish came to Dad and the best bit about it was that the float was only in the water for 2 minutes. This proves that pre baiting is the way forward on large lakes.

After Dad landed the Tench we took a few pictures and slipped her back. We moved to different swims throughout the day trying different places on all the lakes, each having unique problems like the mud, overhead wires, trees but the worst was this constant wind.

John took us to a smaller narrow lake where we crept into a gravel bay trying to make as little noise as possible and placed our floats two rod lengths out. This part of the lake was very shallow and it was only four inches deep six foot out, then had a steep drop down to 10ft where the fish cruised up and down looking for food. We had instant success and I caught three pristine dwarf Tench of about 8oz and Dad also had two. John had seen some huge bream being caught out of this swim in the last two weeks so he was really hoping we’d catch one of them. No bream; we did come back later hoping we’d hook into one but we didn’t, but we did catch some more of the awesome dwarf Tench.

The only problem of pre baiting and getting the fish so confident in feeding is that the fish swallow the bait so fast and quickly that some of the fish were bite us off. Dad caught a few more fish on the bigger lakes and we all decided to go fishing for perch at Kingfisher.

John had told us about a huge perch the carp guys had seen recently and we decided we give a go and try and catch it. Dad and I fished for roach, I must have caught 30 or so fish and dad caught a little 2oz perch. John didn’t catch that monster perch but I got some great pictures of birds and had a smashing day.