A Chub and Pike Expedition, by James Buckley

A Chub and Pike Expedition, by James Buckley 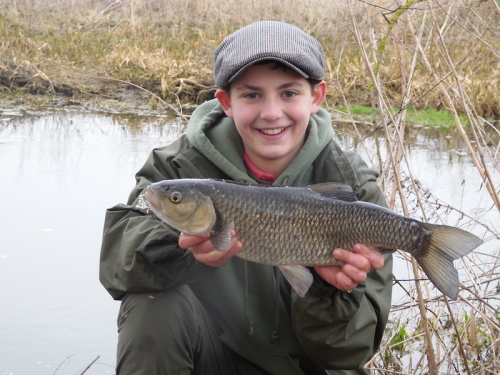 James Buckley is our ‘Peter’ from Series Two. He’s written a fantastic blog post about a recent fishing trip with John Bailey and his Dad…

Dad and I stayed the night at Carrick’s Castle B&B. After waking up and having the most amazing breakfast with John Bailey, my Dad and I went outside and talked tactics. We decided to go after Pike on a lake we had all fished together 2 years ago, when we had 27 Pike between us in just over half a day.

We arrived with our lure rods at the ready, dead baits on hooks and we cast out under a tree in a deep bay. The bay was full of snags; over hanging branches, tree roots, weeds, reeds, but we also knew full of Pike. After fishing for about 20 minutes or so, we began to worry. We had no takes, which was usual for that area, and knew if we were going to catch anything we would have at least had a run by then.

Shortly after, we noticed that float with the dead bait on was moving away and it slowly went under. I reeled in the slack line to feel the fish before setting the hooks. I struck hoping to hit into something big, but when I started to play the fish, instead of a huge crocodile, we found a small but pristine Jack of about 3lb.

After fishing on the lake for an hour and a half, we moved to fish some bends on the River Wensum. These bends were deep and slow, perfect for large river Pike. We watched the float wave in the water but still no action, so we reeled in to move up river to our next bend where the float dipped and twitched and moved but wouldn’t go under. After about 10 minutes of this we reeled down, hoping to feel a fish, but instead we reeled in 2 crayfish that had totally destroyed our dead mackerel.

We moved back to the lake to see if we could catch some Perch in a really deep hole, but again we blanked after fishing for about 30 minutes. John then said maybe we should move on to two small weir pools to try and catch Dace, as my biggest is only 1oz. I fished the smaller weir while Dad fished the larger one. We hoped that a constant feed of maggots would get them feeding. Again no bites, this made us all really think.

Dad stayed at the weir pools trying to catch some Dace and John and I moved down stream to a shallow run under a tree, this made trotting quiet hard but John managed to hook a trout of a 1lb. John went back to get Dad as we were hoping we had found some fish, but that was the only fish we caught in that swim, so John drove us half a mile down river to try and catch some big Chub.

John took us to the best swims where we pre-baited with mashed bread. We pre-baited four swims and then went back to the first to start fishing. We used a light quiver tip rod with two SSG shot on the line, just keeping the bait on the bottom. The bread sank down into the water and we waited for about ten minutes. Suddenly the tip bounced violently and then the tip pulled round. I had hooked a big Chub, it went straight in to the main flow and pushed its way to the far bank. It felt heavy and you could feel the line pinging against its fins. I got the fish in close and Dad ran back to the car to fetch my camera. I unhooked the fish on a landing mat and placed it back into the water to let it recover. Once Dad got back, we weighed the Chub and took some photos before slipping it back in to the depths of the river. The Chub that I caught weighed 5.4lb that’s 5oz short of my personal best.

We carried on fishing in the other pre-baited spots and missed two more bites, much to John and Dads tutting from behind!