Ed’s Note: We’re delighted to publish the first blog from James Buckley, star of Series 2 of Fishing in the Footsteps of Mr. Crabtree. In his first post he shares with us his birthday adventures…

A birthday treat; I wanted to go fishing somewhere I’d not been before on my birthday and, after a quick look through The Rookery Angling Club fishing membership book, I decided it was to be a pike fishing day.

Having seen some of the Carl and Alex videos from Weirwood, and as my club membership allows me to fish two short sections of the Reservoir bank, I decided we should pay it a visit. The pike get very big here.

We got up at early to a very frosty cold dawn and arrived at the lodge about 7.30am, just in time to sneak in the café for a bacon sandwich, and checked in at the lodge. Mike and Deb are really lovely people and gave us great advice.

We started off with lures and deep diving plugs in a bay for 45 minutes or so but found the water to be quite shallow so moved to find some deeper water. At about 9am an experienced pike fisherman came along, it seemed that most anglers who knew the water got a boat and went to the far side of the reservoir where bank fishing was not allowed. We searched all the areas where we could bank fish but a lot of the areas were shallow and full of weed. Whilst we did not catch any fish it ended with the wonderful sound of a steam engine running along the valley from the Bluebell Railway and its whistle echoing across the valley. We also saw a herd of deer which gave me chance to test out my new birthday present, a camera with a long lens.

On the way home we decided to call in at one of other club waters for pike only to find it frozen over, we left promising to come back. One final stop off though, to try drop shotting for Perch at another lake, hoping it would not be frozen. We found four people fishing. They had all broken holes in the ice and where pole fishing. Some were actually catching decent sized roach so we stayed and chatted for 30 minutes before going home. 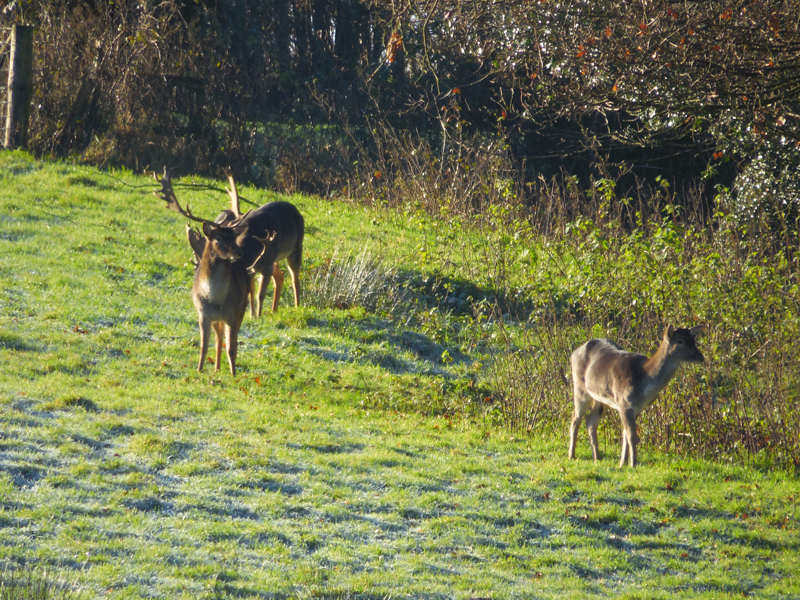